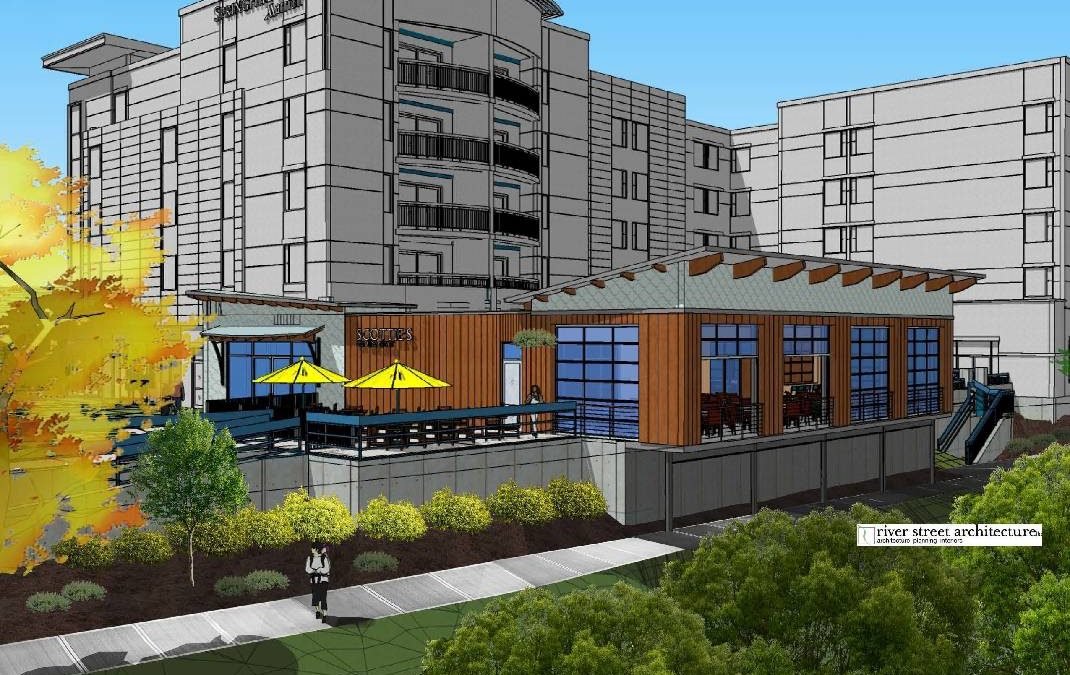 A new downtown riverfront steak and seafood restaurant is slated to start going up late this month as its owner looks to woo both Chattanooga diners and tourists.

“There are a ton of things to like about that space,” said Chattanooga restaurateur Scottie Bowman about the site off Riverfront Parkway and adjacent to the SpringHill Suites by Marriott.

Bowman, who already owns the Big Chill & Grill on the North Shore and is a partner in Sing It Or Wing It on Market Street, said the new venture’s location near the Cameron Harbor development is within walking distance of the Tennessee Aquarium.

The 250-seat restaurant, a $2.3 million project to be called Scottie’s on the River with a planned fall opening, also will be near the Tennessee Riverwalk and newly built boat slips, she said.

“I wanted it to be modern and tie into the existing hotel but remain different and independent where they complement one another,” Bowman said. Plans are to share parking with the hotel, she said.

“That was my No. 1 preference to have a local, successful, independent owner-operator,” he said.

Schimpf said the eatery will add more convenience to Cameron Harbor, one of the biggest residential and commercial projects to go up on Chattanooga’s waterfront in decades.

The Chattanooga developer, along with Nashville’s Evergreen Real Estate is overseeing what could become $200 million worth of housing and commercial space when built out.

Schimpf said the restaurant is “one more link in the chain of being able to do everything within easy proximity.”

The restaurant will feature high-end steak, seafood and oyster dishes and offer a full bar.

Bowman said that with Big Chill and Sing It Or Wing It, which she operates with Gina Bennett, another restaurant wasn’t on her radar.

“It was too good of an opportunity to pass up. Riverfront dining is a special experience and everything about the building takes advantage of it to the fullest,” she said, noting there’s lots of glass along with garage doors which open to a patio area.

Bowman said plans are to lease a boat slip to permit water access to the eatery, which will be managed by Angela Lee and designed by River Street Architecture.

Darlene Brown, president of Real Estate Partners Chattanooga LLC and exclusive listing agent for Cameron Harbor, said that area “offers a lifestyle like none other in the area.”

She said she’s marketing the last existing luxury townhome with boat slips and three units in the third and final stage of the single-family homes.

Schimpf said the opening up of the Riverwalk at Cameron Harbor and connecting downtown with St. Elmo was key and part of “filling up the pieces of the vision.”

“The Riverwalk is the spine,” he said. “There’s lot of ribs branch off of it.”

He said Cameron Harbor is “a natural evolution” of the 21st Century Waterfront Project that was crafted and built when U.S. Sen. Bob Corker was mayor and involved the upgrade of Ross’s Landing and the waterfront.